For rock guitarists, it’s Van Halen’s “Eruption.” In classical music, it’s “Flight of the Bumblebee.” For bluegrass banjo pickers, “Foggy Mountain Breakdown.” Every genre of music has one work that, more than any other, serves as a rite of passage. You don’t have to spend years in the jazz community to know which tune fits that role.

Whether John Coltrane’s “Giant Steps” is the most difficult jazz standard of all time is a matter of opinion, but most would agree that more than any other contender, its name serves as shorthand for improvisation intimidation. Vox calles it “the most feared song in jazz.” The Jamey Aebersold series has a volume devoted entirely to helping students master the progression. Ever since pianist Tommy Flanagan struggled with the changes at the original recording session, jazz musicians have seen mastery of the “Coltrane Progression” as the genre’s holy grail. Like ultra-marathoners or actors who have worked for a notoriously demanding director, most jazz musicians have a “Giant Steps” war story or two. The tune has been a reference point for more than half a century. How many jazz standards become memes? 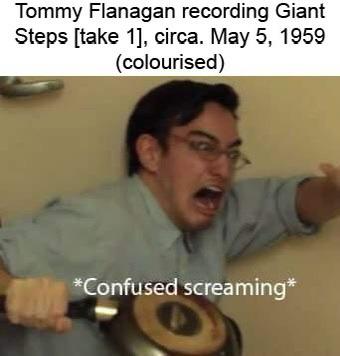 What makes “Giant Steps” difficult? The two main things are that it is usually played very fast (Coltrane’s original recording was north of 300 beats per minute) and that the chord progression constantly jumps from one key center to another, making it an obstacle course for the improviser. Once the musician can navigate the chord changes, there is the challenge of making it their own. Since ‘Trane, multiple generations of musicians from Pat Metheny to New York Voices have performed and recorded it, so saying something new musically with it is not easy.

All that being said, what are the advantages of learning “Giant Steps” more than 60 years after it was first recorded?

Even those who never plan on performing “Giant Steps” can still glean benefits from learning it.  While every chord progression presents its own requirements, the process of acclimating to “Giant Steps” – finding an approach, practicing and perfecting it – and the musical vocabulary developed as a result can be applied almost anywhere: bluegrass, metal and more. Think of the Farmers Insurance commercial – “We know a thing or two because we’ve seen a thing or two.”

Spending time with “Giant Steps” can also provide a lesson in musical history. Like most seemingly radical innovations, “Giant Steps” didn’t come out of nowhere. Wikipedia cites Rodgers and Hart’s “Have You Met Miss Jones” as an influence: “The song’s bridge, featuring key motion by thirds, may have served as an inspiration to John Coltrane in the development of the ‘Coltrane changes.'” Going back even farther, Coltrane was also influenced by Nicolas Slonimsky’s “Thesaurus of Scales and Melodic Patterns.” Musicians who worked with Coltrane during the “Giant Steps” era report that he carried the book around everywhere.

Another advantage of playing “Giant Steps” is that after spending time with it, almost everything else will seem effortless by comparison, just as after training at high altitudes, an athlete will find competing at sea level to be easier. There’s an old joke about a guy hitting himself with a hammer. When asked why he is hitting himself with a hammer, he says, “It feels so good when I stop.”

Since “Giant Steps” several challenging jazz tunes have entered the literature and shown some staying power. Jaco Pastorius’s “Teen Town” is a benchmark for bassists, as is Mike Stern’s “Chromazone” for guitarists and Michael Brecker’s “Syzygy” for saxophonists. Still, it seems unlikely that another standard will capture the imagination of the jazz world quite as “Giant Steps” did. As the study of jazz continues to grow in years to come, so will “Giant Steps” and its infamous and inspiring legacy.

One thought on “Is “Giant Steps” really the hardest jazz standard to play?”